After another five days of hiking and another 75 miles ticked off, Lisa and I are down for another zero day. We’re holed up in another tourist town nestled in the San Jacinto Mountains. It still astounds us that in just a few miles we can travel from 85 degrees in the high desert to 45 degrees at a more temperate elevation. It’s a good time to rest. The mountains are socked-in, there’s a threat of rain and snow, and my feet have been particularly sore from constant walking and deviously small blisters pinching down on my little toes. We’re debating an alternate route for tomorrow that would take us over San Jacinto Peak. At 10,834 feet, it would be our highest summit to date by a solid four-thousand feet. I’m excited to try the climb despite my susceptibility to altitude sickness, while Lisa just wants to avoid getting caught in any snow. We’ll let you know how it turns out. 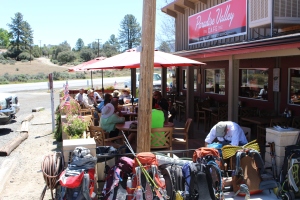 The Paradise Cafe, 1 mile off the trail, enticed us all with its siren song of soda, eggs and bacon and burgers.

Since Julian we’ve been hiking/camping with the same crowd, give or take one or two folks each day. (I’m hesitant to drop real names without permission and most trail names have yet to be earned or given out, so the list is incomplete.) We tend to congregate at water sources, campsites, and restaurants that aren’t too far from the PCT. 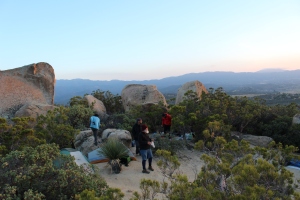 Nine hikers camped out in this boulder field atop a sandy ridge. We watched the sunset together. Later that night the Milky Way was visible.

For better or worse, the group is dissolving. Bushwhacked is the charismatic epicenter of our hiker wave although he yearns to pick up the pace and leave us slow pokes behind. He’ll have to chase down an ex-marine from California and a fellow from Blacksburg, VA who paired up and have pushed on to San Jacinto Peak despite the weather. One of the guys we started the trail with, a recent college grad we’ve dubbed Risky Business due to his iconic sunglasses, is still here in town, likewise giving his exhausted body a break. He’s planning to cover less mileage than Lisa and I in the coming days. Another of our original crew, a vegan hiker who wears running shoes without socks and carries perhaps no more than ten pounds of gear and is  capable of hiking thirty-plus miles a day but much prefers to dally about a beautiful vista, has disappeared into the ether. He could be ahead or behind, we know not which. The woman we started the trail with reportedly hiked twenty-five miles the first day. Racing to finish the trail before her junior year of college kicks off, I doubt we’ll ever catch up to her. The last two men we started with (friends from the Appalachian Trail and two of our favorite hikers) are likewise zeroing here in Idyllwild. One is a former librarian/web developer with fascinating insights on backpacking and our journey in general. His partner in crime is a retired journalist with a curmudgeonly facade and a razor sharp wit. He calls himself Reese after the actress and is the only person I’ve ever met who can utilize the affirmation “mos def” appropriately and without irony. Reese and the Librarian have been keeping pace with the greater group but they march to their own rhythm, resting and hiking where and when they choose. It seems more happenstance that we bump into them regularly, although Lisa and I are delighted whenever they’re nearby. The pair are debating skipping large portions of the desert should the heat continue to be a burden. I can’t blame them.

There others I haven’t described, but each of them have already contributed indelible memories. We’re sure to run into some of them, again and again, over the coming months. The company is great, but camping out alone is its own unique and fulfilling experience.

3 thoughts on “Idyllically Idle in Idyllwild”