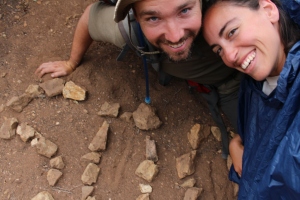 On June 10th, Lisa and I completed our first month on the PCT. We also passed the 500 mile marker on that day although we had not quite hiked five-hundred miles. There have been a few trail closures, two stretches bypassing fire damaged areas and one circumnavigating some endanger toads and their habitat. PCT officials have laid out detours that include road walks. A lot of hikers hike these detours while others are uncomfortable hiking on roads. Lisa and I have hiked some of the detours and skipped others with too much traffic. Purists would no doubt scoff at us but we don’t feel like risking becoming hiker-pancakes. That’s my new term. Feel free to use it.

Since leaving Wrightwood, we’ve been hiking a lot with our good friend Noah, who finally has his trail name: Gummy Bear. One guess on what his favorite snack is on the trail. Lisa and I also have trail names now but more on that later. Gummy Bear, our Orange County native and guide to all things southern California, shares camp with us at night, wakes up after Lisa and I have taken off in the morning, then blasts by us around midday and beats us to the next campsite. His brother periodically drives up from Los Angeles to bring Gummy Bear his supplies. When Gummy Bear needed to replace his shoes and pack, his brother arrived and took us all to an REI in North Ridge, LA. It was quite a shock to go from the empty desert into the teeming edges of this packed metropolis. Inside the REI store alone were more people than we see in a week. Gummy Bear took us to an In-and-Out Burger where we devoured burgers, fries, and shakes while I quoted lines from the Big Lebowski in my head and marveled at the dozen workers crammed inside a tiny shack, toiling shoulder to shoulder over deep fryers to stay ahead of the lunchtime rush. Lisa and I have been discussing a move to Los Angeles after we complete the trail but our little sample of the urban sprawl has left us a bit daunted. That said, many thanks to Gummy Bear for letting us ride along, load up on some much needed calories, and replace some holey socks. 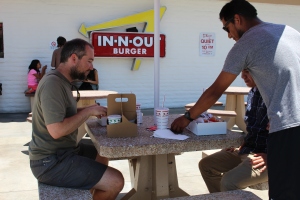 Gummy Bear and me, getting ready to stuff our faces.

For a pair of New Englanders, the novelty of hiking in the desert has all but worn off. The mountains seem so brown and lifeless under the unrelenting sun, although in truth, the landscape is not that much more barren than where we started the PCT near Campo. We’re now at mile 558, with only about 150 miles left before we reach the Sierras, and I am restless to escape the desert. We long for the shade of trees and water sources that are more than stagnant puddles or muddy trickles down hard-to-reach canyons. One thing we can’t complain about (actually, we have the luxury of hiking across the country so we really can’t complain about anything) has been the weather. While we have had a few days were temperatures rose above 100 degrees, for the most part it’s been unseasonably cool. We had rain for the two days during which we cross a corner of the Mojave. Rain in the Mojave in June!! I will often sigh a breath of relief whenever a cloud blots out the sun, especially while I’m chugging up a mountainside. When it rains, I’m in heaven.

Gummy Bear, Supertramp, and Laughtrax hiking under a rainbow through the Mojave after a light shower.

Every night, camping is a new experience as our home is constantly changing. The last several days have been more fascinating than usual. Our first night out of Wrightwood we camped illegally in an closed campground with picnic tables and unlocked privies. The next evening, we slept at a KOA campground crowded with boy scouts and weekend campers, bought ice cream and soda from the camp store and ordered pizza from town. The following, we cowboy camped under the stars in an empty lot next to supermarket in Aqua Dulce. We woke up before dawn and set a personal record when we hiked 24 miles to Casa de Luna, the home of famous trail angels Mr. and Mrs. Anderson. The Andersons and their renowned hospitality deserve an exclusive blog post which I hope to get to later. It was here that Lisa and I settled on our trail names, Rebel and Laughtrax, respectively. Rebel because Lisa carries a Rebel SL1 camera that to most weight-obsessed hikers would seem a ponderous and annoying load. Laughtrax because I often surprise hikers with random bouts of laughter while I’m hiking. The laughter is not because I’m maniacal or crazy, or not just, but because I often listen to comedy podcasts while hiking. After Casa de Luna, Rebel and I returned to camping at the usual little patches of flat ground near the trail. Last night and tonight, we’re recuperating at a Best Western in the town of Tehachapi.

It’s late and tomorrow we’re setting out on a seven day stretch to Kennedy Meadows and the conclusion of the desert. So much more has happened that I want to write about but it will have to wait. Lisa and I are healthy and safe and excited for the high peaks of the Sierras. They’re only 143.7 miles away. No sweat. Or lots of sweat.