This isn’t Matthew, aka Laughtrax. This is Lisa, aka Rebel. Rebel SL1 if you want to be technical. I’m interrupting this blog to bring you a digression – my digression. After 900+ miles I needed a break. So I left the trail.

It seemed like a decadent idea: a vacation from my vacation. Yet I knew I needed it. Here I was hiking in the High Sierra mountains of California, past magnificent turquoise blue lakes, stark majestic peaks, and other picturesque terrain unlike any I’d ever seen before. I wasn’t worrying about bills, work projects, grad school assignments, or any of the other stressers that were part of my pre-trail life. I was simply walking through the wilderness with the love of my life. Isn’t this exactly what I would be doing if I could be doing anything I wanted? But it wasn’t. At least not in that moment, and the many moments that were building and building upon each other, slowly overwhelming the joy that I wanted so desperately to feel again. So I decided I need to do something different. I would travel at 75 miles an hour instead of 2.5, traversing three states in a single day to visit my dear friend Caitlin.

Caitlin is one of those friends that if you are lucky enough to find, you hang onto for life. She knows me intimately and has known the many versions of me from childhood through adolescence and into adulthood. In elementary school we sprinted across the asphalt together playing wall tag at recess, accessing a high gear that most other kids could not match. In middle school we often accidentally wore our matching yin-yang T-shirts to school on the same day. In high school we shared many adventures and misadventures, including the time ended up in the emergency room on Halloween morning due to a costuming project gone awry. For my seventeenth birthday she gave me a bottle of Saint John’s Wart and the Sawn Mullen’s album featuring “Lullaby,” (you know, the one that goes “ev-ery-thing-‘s gonna to be alright.”) So, it was no surprise that when I called her out of blue, having not spoken in months, and said that I needed to leave the trail and could I come stay with her, she replied “Of course, you’re welcome for as long as you’d like.” 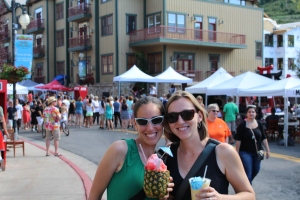 I began planning. Matthew, ever supportive of me, agreed to my plan in which he would stay on the trail and I would take a week off with my friend to regroup. Separate adventures ending in a rendezvous in eight days at a hostel about 200 miles up the trail. I wasn’t sure how I would get from Mammoth Lakes, California to Salt Lake City, Utah and then back to South Lake Tahoe, California. And, I wouldn’t have a cell phone (he would take it for safety to use the GPS). But I would figure it out. Somehow.
…
So what happened? My search for transportation options left me feeling frustrated and wary of the solo adventure I was about to undertake. Then, at the convenience store next to our hotel, the sign “rental cars” gave me hope. Early the next morning I was first in line… almost. As the person in front of me spoke with the agent I thought, they won’t have any cars available without a reservation, and even if they did they will not let me rent it one-way to Utah. So, I followed the agent and the customer out to the parking lot for the car inspection.
“I’ll pay half the cost if you drop me off in Reno,” I called out hastily before the customer could grasp the keys from the outstretched agent’s hand. The customer turned to me, puzzled, hesitant, then said “We can work something out.” The keys transferred and the agent walked back to her post, addressing Matthew in passing, “I have his driver’s license on file in case…” she trailed off unsure herself is she was joking or serious.
From Reno I was able to rent a car one-way from the Reno airport to the Salt Lake City airport. At 75 miles an hour I traveled from California, through Nevada, and into Utah. I listened to bad pop music and good public radio, enjoying both equally. When I arrived at Caitlin’s house, fresh brownies were cooking in the oven. “Are you hungry?” she asked. “We can do homemade tacos, pizza, or veggie burgers.”
…
Adventures in Salt Lake 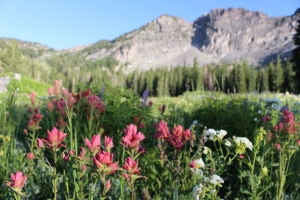 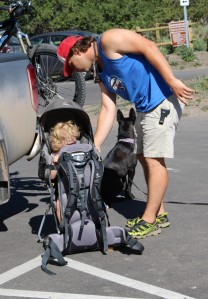 Hiking with Meade, his friend Marshall, and Marshall’s kid Hudson, and three dogs.

Three adults, three dogs, and a toddler in the extended cab of a pick up truck.

One thought on “A Digression”